The stakes are higher than ever in today’s K–12 assessment environment. News outlets across the United States have captured the challenges that states, districts, and schools are facing as they prepare to implement new standardized assessments. Summative assessment providers are also feeling the pressure. 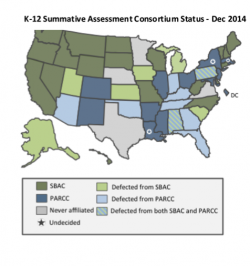 The introduction of the Common Core State Standards in 2010 led to the creation of two federally funded multi-state assessment consortia, the Smarter Balanced Assessment Consortium (SBAC) and the Partnership for Assessment of Readiness for College and Careers (PARCC), a move that impacted state-level autonomy in the development and administration of assessments and thereby the market for assessment providers. Our work to understand the implications of this market shift for summative assessment providers has borne the following high-level findings:

The longer-term and more interesting issue relates to the future of the consortia. Our prediction is along two paths. First, the consortia will stabilize their role and service offerings, albeit within a much smaller sphere of influence than originally expected. Second, competition will increase from new or re-envisioned players. New consortia will be formed – as we have seen in the area of assessments for English language learners – and organizations like ACT and the College Board are sure to play a more explicit and proactive role in the K–12 high-stakes assessment market.

There is a crisis in U.S. schools: Teachers, the most important ingredient in a child’s learning,1 are demoralized. Even before the COVID-19 pandemic, one in six K-12 teachers reported that they were likely to leave the profession. During the pandemic, this number increased to one in four.2 While many factors impact teachers’ experience and success in […]